skip to main | skip to sidebar
Not everything in life is simple. Red Smed, however, is. And to prove it this blog has been set up to take you deep into his deranged socialist utopia where Lenin was quite a nice bloke, , Bridgwater has been renamed Parretgrad , every home has to display a portrait of Jake Thackray and Leeds United are at the top of the premier league. 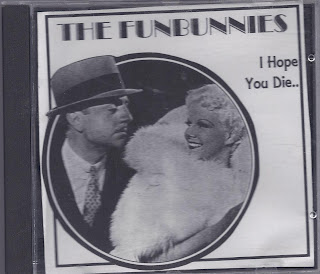 I'm sat in Tescos at St Ives. Somewhere below me a dozen Czech students have been sent for a walk around Cape Cornwall in gale force winds and a near horizontal rainstorm and are doubtless at this very moment being swept out to sea, buffeted  from rock to rock and dashed to pieces on the cruel headlands of what would otherwise be quite nice surfing country. What better setting to contemplate top Bridgwater all girl(and 3 men) band The Funbunnies.

The Funbunnies formed in around 1998 and basically consisted of 3 singers - Elaine, Julia and Lorraine or Elaine, Julia and Heidi, and a backing line up of Red Smed (guitar) Big Barry 'Fowler' (bass) and Kevin 'Nervo' Freeman (drums). Gigs were frequent and always popular. Material was usually well known crowd pleasers. 'Brown Eyed Girl' featuring Julia, 'Shoop Shoop song' featuring Lorraine or 'Talking bout a Revolution' featuring Elaine or 'Happy Hour' featuring Heidi. But now and then they did a few originals...


Red Smed (who wrote the music and plays guitar on this track) wasn't available for comment this morning as he was busy soaping down the Cornish cliffs around Zennor before driving his minibus as fast as he could away from the bobbing and waving Czech students, now some yards off the headland.

However, in a previous statement on the subject he said "I Hope You Die is one of the best songs I've ever written clearly, apart from most of the others. And several that I didn't write. For me however, making a film of the song has always been a problem as I don't really want anyone to die. Apart from Donald Trump, Nigel Farage and the whole Norwich City Team. So I could never find the right imagery for the video. Then suddenly after a particularly memorable week driving French students around I managed to grab a well earned rest at Chesil Beach and during a brief 'out of body' experience, involving a fish cake, I thought hey, this could be about me..."

The actual lyricist of the song , Kim Newman, is not a particularly bitter and twisted individual and his many books and film reviews can be found here.

The Funbunnies lasted maybe 2 years. At one point the mums (that they all were) let their daughters take their place and a 'Mini-Funbunnies with  Cathy, Beth and Alice took the stage at the art centre and did a version of Edy Reeders 'Perfect'.


Posted by RED SMED and the Hot Trot Smash the System Boogie Band at 04:07

The Songs of Red Smed 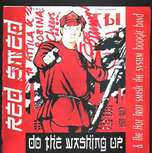 RED SMED and the Hot Trot Smash the System Boogie Band
a fat communist who plays guitar and writes rubbish songs , supports a rubbish football team and is a crap councillor